Here’s a guest post we wrote for DIWYY, a girl’s guide to travel.

In making the most out of our time abroad, it’s often important to reflect on the reasons why we travel. We travel to take in different cultures, to immerse ourselves in a world entirely foreign to us, and to reclaim that childhood wonder of discovering something we never knew existed. Sometimes the most transformative and memorable experiences come with a certain amount of risk – getting out of your comfort zone and taking a leap of faith in a person or place. 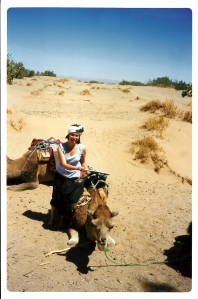 “When I was twenty years old, I went to Morocco. One afternoon I walked into a carpet shop with my bulky guidebook in tow, telling the shopkeeper that I wanted to visit the Sahara Desert but couldn’t afford to go. Before I’d finished my cup of mint tea, I was in the back seat of the shopkeeper’s Honda Accord, tearing through the windy roads of the Atlas mountains for fifteen hours until we reached the desert where his cousin, Ali, was the chief of a caravan tribe.

After five nights traveling on camel back, subsisting on bread our guide baked in the sand, and sleeping under the stars tucked in wool blankets, I returned to the caravan camp, just as the sun went down to mark the first night of Passover. Atop a sand dune, my new friends and I drew the Seder plate in the sand and together sang ‘Let my people go.’ Gazing up at the brilliant stars, Ali says to me, ‘The only real difference between us is that my tribe reads one more book than yours.’

The modest amount of money I spent had given Ali and his cousin enough to live on for a month. And my newly gained understanding of the world, and of myself, instigated a decade of exploration that has aimed to positively impact the world, not least of which, was founding Vayable.” – Jamie, founder and CEO of Vayable

It was purely serendipitous that Jamie met this shopkeeper who knew a caravan tribe leader, and it was fortunate that she was able to safely put her well-being in a stranger’s hands. We started Vayable to provide a safer way to take these leaps of faith. Vayable connects travelers with local experts around the world whom we have personally met and vetted.

When looking for things to do, off-the-beaten path experiences are often hard to find. Some of the most memorable and sought after experiences on Vayable take you to places you wouldn’t necessarily be comfortable going to by yourself. A favela in Rio de Janeiro, the Tenderloin district of San Francisco, Queens at midnight. Walking along the streets of San Francisco on the homeless tour with Milton, a homeless man himself, and listening to personal anecdotes about the neighborhood makes you gain a deeper understanding of issues both unique to San Francisco and prevalent amongst the rest of the world.

As travelers, we want to have access to amazing things while also preserving the integrity of local culture and staying safe. We want to get out of our day-to-day, respect the culture that exists, and experience it for ourselves. We live for those moments of connecting with someone from around the globe and stepping into their world. That is why we travel, and that is why Vayable exists.