Coming off the plane from Singapore to Tokyo, I found myself lost in an airport full of Japanese Kanji writing with no mention of an exit sign.  It took me about 15 minutes to find the exit, but once I did, my friend Syu was waiting for me on the otherside.  From here on out, the only difficulty I had was navigating the culture rather than language.  With my personal translator and great friend to show me around, Tokyo went from being a city I was frightened of, to being a city which I thoroughly enjoyed.

While I am cetainly no big seafood fan, I have to admit that Tokyo helped change my perception of it.  I found myself eating a wide variety of seafood that I would have never considered before arriving at Narita airport- from sea urchin to eel, from fatty tuna to squid, I ate as many different types of sushi that I could possibly gorge myself with.  Not once did I see a menu with the typical Chicken Teryaki I had become so accustomed to in my unwillingness to eat Japanese seafood while in America.  Though I had had the occasional California Roll in California, once I was in Japan, I was eating unagi and all other types of fish without thinking twice.  Funnily enough, it never bothered me once!  There is something about testing new dishes which seems to be the norm whenever you travel.  Eating local food seems to be the greatest single way to experience a side of a culture you may have otherwise never come across. 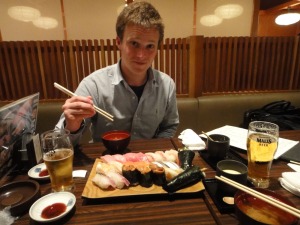 Other than seafood, it was Tokyo’s architecture which fascinated me the most.  If one has been to Berlin, imagine all the dark and drab buildings of the Eastern portion mixed with the bright lights of Manhattan.  Other than likening Tokyo to the Gotham City of the old Batman comics, this Berlin-New York combo is possibly the only way for me to describe Tokyo’s scenery.  I didn’t spend too much time doing the typical touristy things, but instead I found myself getting lost in the city for the fun of finding your way back and experiencing Japanese culture first hand. This was certainly helped by the fact I had my friend Syu with me at almost all times! I couldn’t imagine trying to get around without a Japanese speaker.

On my last morning in Tokyo, the only thing I found myself regretting was the fact that I had yet to see Mt. Fuji.  Twenty seconds later, the smog lifted from the hills in the distance and Voila! Mt. Fuji appeared for a few seconds from my hotel window. I thought to myself, “I have finally seen Japan!” — Far from it however.  I realized almost immediately that there was so much more to this island nation which I would love to see in the future.  I can only hope that I find myself back there in the future!